An Auspicious Day for the World’s Peasants

Wednesday the 17th of April 2013 saw a curious combination of events for land
workers the world over. It was, of course, Thatcher’s funeral; an ironic orgy
of public funds in commemoration of the grand architect of the neoliberal
model. It was also International Day of Peasant Struggle, a day established to
commemorate the massacre of 19 landless peasants on 17th of April 1996 in
Dorado dos Carajas, Brazil. The victims were members of the MST (Landless
Peasants Movement) who were in the process of re-appropriating an unproductive
farm for landless families. The ranch had been made home to 3000 families who
were in the process of bringing the land back into agricultural production.
The 19 were killed in defence not only of the land-workers camp but also the
food sovereignty principle that hungry people have the right to work abandoned
land. That same Wednesday saw the establishment of a new movement in Britain
to promote the interests of small holders and sustainable land workers. This
is Wales and England’s branch of Via Campesina, the grass roots peasant
movement that is working for food sovereignty in 78 countries worldwide.

It is the the ascendancy of neoliberalism that links the seemingly
disparate themes of Thatcher’s funeral and  peasant social movements. Thatcher
and Regan’s dream of a world in which the rule of the market replaced state
intervention, trade unions and and mutual aid has been remembered by the
British media almost exclusively in the context of the ex-mining villages of
the Yorkshire Riddings, but it also had profound affects for land workers the
world over.  The breaking of the NUM and the closure of British mines brought
unemployment and social decay previously unknown in post war Britain and it is
a story that undoubtedly needs to be told. However, the neoliberal legacy for
agricultural communities in the UK and in countries of the global south that
fell foul of Structural Adjustment is on a scale that dwarfs British coal. It
is an example of the contemporary preoccupation with industrial as opposed to
agricultural production that Thatcher’s legacy on agricultural workers have
been side-lined by the stories of their industrial counter parts. One wonders
weather the  mine closures have entered popular memory above, say, the 1980’s
decline in milk production for a quietly insidious reason. Coal, as Britain’s
least defensible industry, (from the standpoint of the economic, the social
and the environmental) adds more credence to the established ideology of the
necessity of ‘modernisation.’

The economic transformation from the 1980’s dealt a serious blow to
the worlds land workers. It was the food producers the world over fall foul of
curious notion that production of staples for local markets was less important
than acquisition of foreign currency via export of ‘non-traditional’ products.
Coffee, chocolate and cut flowers tailored to western middle class consumers
were the preferred options. Spreading from the free-market experiment of
Pinochet’s Chile, liberalisation of agriculture dismantled support mechanisms
for food production the world over: Import tariffs, price controls, local
marketing boards etc. Conversion to ‘non-traditional’ production was only an
option for farmers with reserves of capital. The smaller others were squeezed
out of the market and forced to migrate in search of urban employment and
hence the swelling of peri-urban squats across the developing world that are
today so associated with drugs and gun crime. Even those farmers who could
find sufficient capital to convert to export orientated production  ‘found it
difficult to survive’.  This was due to various factors including a world
of fluctuating world markets and diminishing returns from monocultural
farming practices that dispensed with the diversity that is agriculture’s
ecological and economic life line. 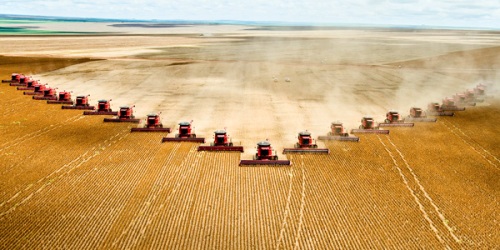 Loss of security and employment for individual farmers spelled loss of
food sovereignty for  countries across the global south.  The Mexican
‘Tortilla Crisis’ caught headlines as the country that originally developed
corn saw a 60% rise in the price of this corn based staple. Mexico is now
permanently reliant on foreign food imports for 40% of its total food; a
permanent crisis. The Philippines presents a similar example, once a major
rice exporter, this Pacific island ‘is now the worlds biggest importer of
rice.’  In Africa the results have been the most stark: ‘At the time of
decolonization in the 1960s, Africa was not just self sufficient in food but
was actually a net food exporter.’ Today the situation is very different; 2008
saw food riots in 14 African countries  and the food crisis in west Africa is
deepening daily. ‘Today, the continent imports 25 percent of its food, with
almost every country being a net food importer.’   The Thatcherite legacy is
seen in the UK food system too. In the 1980’s the Milk Marketing Board (MMB)
was abolished, which made farmers compete on the free market. This, with the
latter emergence of the market power of supermarkets has created a situation
in which the buyers dictate terms of trade to farmers. With no MMB to balance
the power of buyers,  milk began a price drop of 40% in 18 months from 2000.
The desperation that has lead to direct action by the diary producers group
‘Farmer’s for Justice’ is a direct result of the Thatcherite legacy on UK food
production.

Whilst the neoliberal assault on peasant agriculture has been global,
so too has the resistance  against it. The largest social movement currently
operating in the world today; ‘La Via Campesina’ has risen since its
establishment in 1993 to defend the right of rural communities to produce food
for themselves. La Via Campesina is now an organisation that boast a
membership of 200 million food producers the world over, that is represented
in the European Parliament and the UN. It was last week’s auspicious Wednesday
the 17th that brought this movement which is mainly active in the global
south, a little closer to home. At the AGM of  European Co-Ordination of Via
Campesina (ECVC) last week in Fuerteventura a group of land workers from
England presented an application to create a branch of Via Campesina to
campaign for the political interests of small holders and land workers here on
home soil. The new organisation which was formed under the working title of
‘The Land Workers Alliance’ had its application excepted by ECVC which links
the UK into the Via Campesina’s international movement for food sovereignty.
This new UK branch of Via Campesina will join the ‘Scottish Crofters’ as UK
members of Via Campesina and can begin taking members and campaigning on
issues affecting farmers in the UK. Plans are afoot to begin various campaigns
including: Access to land issues, a sustainable livestock bill, opposition of
GM foods, the rights of farmers to save seed  and CAP reform.

Let us not use Thatcher’s passing for a sentimental revival or her
politics but rather a critical review of their short-fallings which persist
all around us. In light  of a critical appraisal of the neoliberal legacy
there is no option but to self-organise for the alternative. ‘Globalisation of
the stuggle, gobalisation of hope, globalisation of resistance.’

Grower at Edible Futures, and urban farmer in Bristol and member of The Land
Workers Alliance.

Any food producers from Wales or England who are interested in joining this
new branch of Via  please get in touch.