“I haven’t spent seven and a half years as shadow secretary and secretary of state to see the NHS undermined, or fragmented or privatised… That was never my intention. It is not my intention.” Andrew Lansley, Secretary of State for Health

Three years ago my mum was run down by a 4×4 in North London. She nearly didn’t make it, but, thanks to the wonderful doctors and nurses of the NHS, she was brought back from the brink. Next week the NHS that we know and love is set to be voted out of its current existence by the House of Lords in the form of the Health and Social Care Bill (2011).

These Tory proposals aren’t a healthcare revolution but instead an extension of the slow erosion of the NHS’ founding principles that has taken place over the last few decades. In the 1980s hospital cleaning was sold off, as Dave Prentis of Unison said, ‘to the lowest bidder’. It didn’t stop there. Within three years of taking power in 1997 the Labour Party took us further down the long road of marketising our health service. They set up foundation hospital trusts which were free from the direct supervision of the Department of Health and could set their own terms of service for staff. Foundation hospitals are paid on a ‘per procedure’ basis and compete against one another for patients. 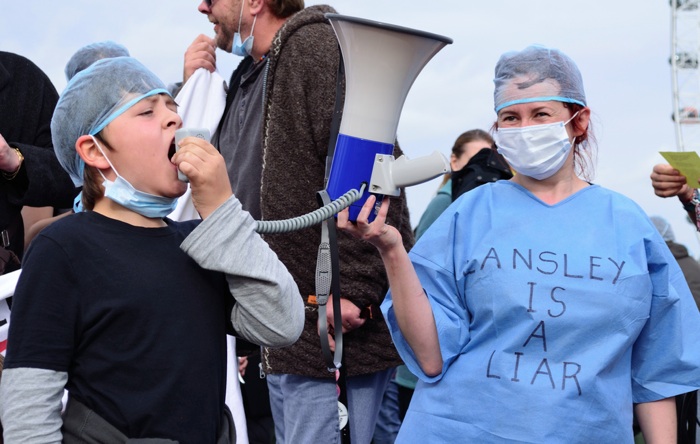 The Labour Party, who are now the self proclaimed ‘defenders of the NHS’, allowed private companies to compete for elective surgery (such as hip replacements and cataract operations) contracts. 25 per cent of the private health sector’s total revenues now come from NHS contracts.

But Labour still hadn’t finished. Their ‘personal budgets’ for people with chronic conditions allowed patients to buy their own care and allowed those with spare cash to pay for more. Inequality in our healthcare system began to creep in. As Colin Leys said:

“In 2000 there were no foundation trusts; no payment by results for hospital treatments; no private health companies already providing NHS acute care and GP services; no independent regulator of a healthcare market (Monitor). Without all these changes, and many others, what Lansley’s Bill now proposes would be unthinkable.”

If Labour’s changes laid the foundations for a marketised health service than this bill in front of parliament is set to start building the infrastructure of privatisation at double speed. Labour let competition slip into the NHS mostly at the level of service provision. This legislation will introduce market forces to the planning and commissioning of these services. The bill will, as Frank Dobson said on the Today Programme this week, allow American healthcare providers, most of who have been successfully sued for defrauding the people they are supposed to be treating, to play a part in our health provision. This disastrous legislation will take power and responsibility away from the Department of Health and place it into the hands of profiteers.

With the healthcare regulator, Monitor, having to ensure that private companies make a profit out of the NHS it likely that more and more procedures will stop being free. As Mark Britnell, previously of the Department of Health, now global head of health at KPMG, and recent appointee to David Cameron’s “kitchen cabinet” of health experts to advise on health service reform said “In future, the NHS will be a state insurance provider not a state deliverer.”

But it’s not just through individual treatments that we’ll be losing money. The cost of this hugely damaging NHS ‘reorganisation’ is set cost the country £2 billion at a time when we’re cutting day care centres for the elderly and school building programs for our kids.

Let us be clear: The selling off the NHS, in the name of efficiency and choice will take us one giant leap towards an unfair, expensive and innefective ‘US style’ healthcare system.

The NHS wasn’t perfect for my mum. After leaving the Royal Free, where her life had been saved, the services on offer began to drop off. She couldn’t get the physiotherapy she needed and she continued to be in pain. But what was lacking from her treatment was not choice. It wasn’t flexibility. What was lacking was investment.

It isn’t just whingeing lefties who think this bill should be stopped. 96% of the Royal College of Nurses voted for a motion of no confidence in Andrew Lansley earlier this year. The British Medical Association say that the ‘bill poses an unacceptably high risk to the NHS in England’ and 400 senior doctors and experts signed a letter condemning the bill earlier this week.

Aneurin Bevan, a Labour politician, once said“The NHS will last as long as there are folk left with the faith to fight for it”. We Blocked the Bill on Sunday.