The Self Fulfilling Prophecy

As coalition cuts begin to bite, hundreds of thousands of young people find themselves out of work and the gap between rich and poor widens, it is becoming increasingly easy to forget about climate change predictions that are now terrifyingly close to becoming a reality. In a time when people are struggling to make ends meet it is no wonder that the post materialist concerns of the environmental movement are falling by the wayside. But, by letting climate change concerns slip off the radar, we may well be leaving ourselves open to corporations dictating and wrecking our future.

Shell’s mining operation in Alberta, Canada tells us all we need to know about the future our planet faces if we take direction from oil companies. Their plan involves using one type of fossil fuel (gas) to heat up another (oil or tar sands) in order to extract them from the world’s third largest hydrocarbon reserve. The Canadian government, as opposed to reserves numbered one and two in the world (Venezuela and Saudi Arabia), can be relied upon for compliance. Each site that is mined will take over 60 years (including 20 years of decontamination) to be returned to its previous state- though this remains a theory as it has never been done before. Plans are already afoot to build a 1,700 mile pipe between Alberta and refineries in Texas and it is being suggested that at least two more of these mega pipes will be needed. 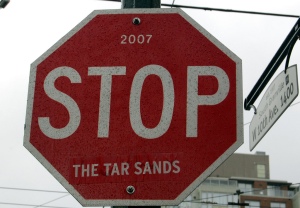 Tar Sands, the sticky oil that requires heating just to get it out of the ground, and other ‘unconventional oils’ are set to triple as a proportion of world supply by 2035.

For a company that clearly states its commitment to tackling climate change Shell doesn’t seem to be doing very much about it. In fact, by investing billions in the dirtiest fossil fuel on earth, they’re going to make things significantly worse. Why, if they believe in climate change, do they continue to make the problem worse?

Shell are held to account by shareholders who, with some praiseworthy exceptions, care solely about financial returns. In a world of dwindling supplies and increasing prices, tar sands are becoming ever more commercially attractive. But Shell, as well as other oil companies, are not transferring their beliefs about climate change into a business model for the future. They predict that, by 2050, a maximum of 30% of energy will come from renewable sources (including biofuels). They have a duty, they say, to ensure a steady supply of hydrocarbons and gas for the remaining 70%. They must continue to dig deeper and deeper and explore riskier environments for oil.

The fact is, as Client Earth and others have pointed out, oil companies don’t really believe anything will be done about climate change or, at the very least, don’t want to admit it. Their modelling is based on a world that will heat up by 6 degrees and this is because they plan to extract enough oil and gas to make it happen. It’s a model that relies on very little being done, by governments or others, about climate change.

They will continue to make money from sucking the oil from the earth and we shall continue to burn it. It’s a self fulfilling prophecy.

So, as Shell attempt to reframe the debate by calling on consumers to take action on climate change (they even have a competition in Canada encouraging green innovation in people’s homes by offering a car as one of the prizes), they continue to feed our addiction. They are playing the role of a heroin dealer offering drugs counselling. But they fail to see the underlying fault in their business plan. Either a) the world will not heat by six degrees because projects like the tar sands extraction will be halted or b) the world will heat by six degrees and the chaos that ensues will mean that Shell, alongside every other business, will face extremely serious problems. 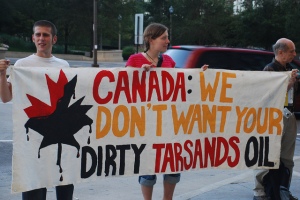 This is not conjecture. Peer reviewed scientific investigations suggest that six degrees warming will result in mass migration, flooding, drought, starvation, rioting and thousands of deaths.

It is a sad fact that companies like Shell feel like they have won the most difficult part of their PR war with environmentalists. They know that everyone is distracted. They will continue to base their business model on climate change projections that will lead to catastrophe.

Climate change has certainly slipped off the activist agenda and in its place campaigners are fighting more immediate threats. However, we ignore the actions of companies like BP and Shell at the peril of millions of people all over the world.  Now, more than ever, we’ve got to fight ‘big oil’ at every turn.