I’ve been criminally absent from writing for the last while. Apologies for that.

It’s quite an odd time to travel through Central London at the moment. In Hyde Park, right next to the near permanent protest outside The Libyan Embassy, the television masts have been erected for this weeks nuptials. Camera crews are already roaming outside Buckingham Palace and pouncing on over excited tourists to hear about why the royal wedding means so much to people around the world. On Monday night, four days before Kate walks down the Aisle to William, people began camping out for the best view of the happy couple. Aside from the fact that my journey to work is now punctuated by the clear signs that a large amount of people have gone insane there are more sinister goings on happening for The Royal Wedding.

Five thousand police, all being paid double for the bank holiday, will be on duty this Friday to ensure that the royal wedding goes smoothly. I, along with 59 other ‘troublemakers, am banned from going anywhere near the proceedings. Protests outside Westminster Abbey are ‘banned’. And that is where this whole royal wedding becomes more than a patriotic annoyance. Don’t get me wrong, i’m not a fan of ‘Muslims Against Crusades’ or The EDL, of course, but i’m even less of a fan of this blanket ban on protests that The Met have thrown down for Friday. They won’t allow protests near the royal proceedings and they say that they may not be able to stop static protests nearby or after the event. Surely this must be some sort of bad joke? To regretfully say they won’t be able to stop protests doesn’t fill me with a huge amount of confidence in The Met’s new friendly approach to protest.

But what law, I wonder, are they using to stop these protests going ahead. Under thePublic order act the police cannot ban protest but can impose conditions if a) they suspect a serious crime is to be committed or b) the purpose of the assembly is to intimidate others. This doesn’t quite chime with the fact that all protests outside Westminster Abbey have been banned until after the ceremony.

But surely a couple of republicans with a banner saying ‘End Royalty’ could rock up on the day and stand silently outside Westminster Abbey. Or a few blokes from the taxpayers alliance could stand nearby with a loudhailer complaining about how much it all costs. Well no, that would be illegal too. Under The Serious Organised Crime and Police Act (Section 132) the police can ban any protest within 1km of parliament if it hasn’t got permission from they police. On top of this they can impose far greater restrictions on protest for a larger number of reasons. A sledgehammer to crack a nut? It’s almost as if the phrase was invented for this illiberal piece of legislation. Originally intended to remove the veteran peace campaigner Brian Haw but, in the end, making him the one and only person to whom the law did not apply, the legislation is now an easy way for the police to stop dissent outside of parliament. As far as i’m aware the police have not disclosed the legislation they plan to use to stop protest on the big day but using SOCPA would surely be unprecedented. The law is currently being done away with in parliament and has been condemned by those as far apart as Liberty and Gordon Brown. 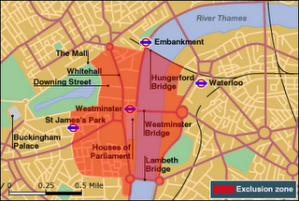 The sum total of this long and winding condemnation of the police tactics is this: There is absolutely no need to put a blanket ban on protests near the wedding. If, as I suspect, SOCPA is to be used against protesters this week there should and I hope will be a huge amount of public anger, including from those at the very top of The Liberal Democrats.

I hope people do protest the wedding. I hope people hold up banners congratulating the couple for their marriage but calling for a real democracy. I hope the BBC picks up the sound of angry taxpayers bemoaning the cost to the economy of the bank holiday. The fact is though that I probably won’t hear anything of the sort. It’s been made clear. This Friday Westminster is a No Protest Zone.